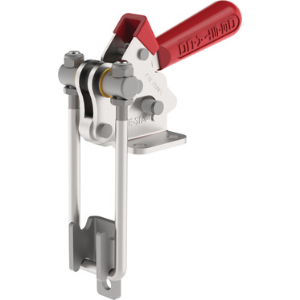 Step 4 Make payment via BACS to our factoring partner,

Destaco 344 Series pull action latch clamps feature a handle to place a vertical U hook (threaded) around a workpiece. These latch clamps are used to regularly close & open fixtures that are perpendicularly oriented to clamp base. Their clamp handles have a thumb control lever for a quick, single handed operation. Destaco 344-R-M-100 clamp offers a 100 mm longer U hook for closing a workpiece at a greater distance than a standard U hook style latch clamp. This clamp has steel construction for strength & durability to withstand regular wear & tear. It features flanged base mounting style for quick installation on a flat surface / workpiece. This clamp is integrated with Toggle Lock Plus feature to act as a secondary locking mechanism and prevent its accidental disconnection during the operation. It has a maximum holding capacity of 2000 lb. Raptor Supplies offers this clamp in variants having stainless steel construction for corrosion resistance; without Toggle Lock Plus mechanism for reducing operating costs. You can order these latch clamp variants having different hook lengths (standard length, 25 mm longer than standard length & 50 mm longer than standard length), by simply removing -M-100 or adding -M-25 & -M-50 at the end of the model number.
We also offer Destaco 341-R-M-100 pull action latch clamp having similar specifications and a horizontal U hook for pulling a workpiece placed parallel to its clamp base.

A. Raptor Supplies offers similar clamp variants, such as Destaco 344-M-100 latch clamp without Destaco Toggle Lock Plus feature for reducing the operating costs where secondary locking of the clamp is not required. We can also deliver Destaco 344-RSS-M-100 latch clamp having stainless steel construction for corrosion resistance and durability.

Q. How do latch clamps work?

A. These pull action latch clamps have a handle to operate the tool, a clamping arm to act as a contact point between the work item & the clamp and a base to attach the clamp to the surface. Once the simple linkage system of the clamp is put in the over-centre position, the handle is moved for creating a force parallel to the base to hold the work items.

Q. What are the benefits of using Toggle Lock Plus mechanism in Destaco manual clamps?

A. Many of the Destaco manual clamps come with the Toggle Lock Plus feature to act as a secondary locking mechanism and ensure the over-centre toggle lock condition of the clamps. This mechanism is essential when fixtures of the clamp are in motion, in a vibratory environment or are inverted. It offers an extra level of safety for the user and the workpiece.

Q. Which grease is recommended to be used with Destaco clamps when rebuilding?

A. Whenever you're dealing with the brand's mechanical clamps, it is recommended to use a coupling grease like Mobil XTC.

Q. What does holding capacity mean in terms of clamps?

A. The holding capacity or the holding force depicts the clamp's capability to hold down the equipment or a sheet metal on the assembly line or during similar manufacturing processes.

Contact your account manager right away to get personal advice.
We're available Monday through Friday, from 07:30 until 17:00.

We reply within 30 mins!

We reply within 30 mins!